The History of Tai Chi Chuan spans over 2000 years. Tai Chi Chuan is an internal Chinese martial art and is typically practiced for a variety of reasons: its soft martial techniques (an art applied with soft/internal power versus hard/external power), health and longevity. 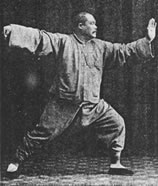 Tai Chi Chuan is often described as "meditation in motion" because it promotes serenity through gentle movements — connecting the mind and body. Today, Tai Chi has spread worldwide. Most modern styles of Tai Chi trace their development to at least one of the five traditional schools: Chen, Yang, Wu, Wu Hao and Sun. These 5 styles have different movements and can physically look very different from one another.

The 2 Predominant Styles of Tai Chi Chuan
The two most important styles are the Yang Style and the Chen Style with the Chen style being considered the original Tai Chi style that gave rise directly or indirectly to all other styles of Tai Chi Chuan. Traditionally Tai Chi family styles were once the sole property of a single family who only taught the style to people in the family household. Chen Chang Xing, the 14th generation Chen patriarch, was the first to teach Chen Tai Chi to an outsider, Yang Lu-ch'an, who then later founded the Yang style of Tai Chi Chuan.

The Yang Style is characterized by evenly paced, soft flowing movements which are almost 'zen-like' distilled in their postures and transitions - while also offering a myriad of delicate intricacies within the execution of each move, transition or stance. The more gentle physical requirements of Yang style Tai Chi make it suitable to a wider audience in regards to physical requirements as well as age range.

The founder of the Yang style was Yang Lu-ch'an (1799-1872). His grandson Yang Ch'eng-fu is largely responsible for standardizing and popularizing the Yang style of Tai Chi Chuan which is the most practiced style in both China and the world today.

The Chen Style is the oldest and founding style of all other styles of Tai Chi and therefore displays the roots of being a martial art much more prominently. The Chen Style has a high dynamic between slow/soft and fast/hard movements and is characterized by pronounced coiling & spiraling movements (silk reeling) with bursts of explosive releases of power in punches, stomps and kicks (fa-jin). This makes the Chen style a little more athletic & visually dramatic compared to all other styles of Tai Chi.

Chen Wang-Ting, an ancestral native of the Chen Village, is believed to have developed Chen style Tai Chi Chuan based upon family-taught fighting techniques in combination with external resources.

The Meaning of "Tai Chi Chuan"

The Mandarin term "t'ai chi ch'uan" literally translates as "supreme ultimate fist" or "boundless fist" - it also is sometimes translated as "ultimate martial arts'. The concept of the "supreme ultimate" appears in both Taoist and Confucian Chinese philosophy where it represents the fusion of Yin and Yang into a single ultimate represented by the Taiji symbol (Yin-Yang diagram). Tai Chi Chuan is therefore said to be a study of yin (receptive, yielding) and yang (active, expanding) - finding balance within constant change.

Tai Chi theory and practice are believed to have been formulated by Taoist monks eventually combining the martial forms and breathing exercises to formulate the soft or internal principles we associate with Tai Chi Chuan and related martial arts today. 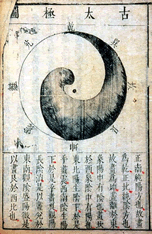 Diagram of the Supreme Ultimate, from the Compendium of Diagrams Ming dynasty, dated 1623. Woodblock-printed book

Outside of Confucianism, Taoism is probably the most important and influential school of thought native to China. Taoism promises us a deeper insight into the principles that underlie the very operation of the universe itself. It stresses harmonizing the mind and body in order to attune oneself to the natural order.

Lao Tzu, the legendary founder of Taoism, wrote the 5000 character classic and central treatise of Taoism, the Tao Te Ching (Classic Book of the Way and Its Virtue). The teachings of Lao Tzu are based on a great underlying principle, the Tao or "Way," which is the source of all being. It states that through understanding of this principle, all the contradictions, divisions and distinctions of our existence are ultimately resolved. According to Lao Tzu, this principle can only be understood intuitively. Grasping the Tao intellectually or through some rationally derived procedure is pointless.

Tao can be roughly stated to be the flow of the universe, or the force behind the natural order, equating it with the influence that keeps the universe balanced and ordered. The contemplation and appreciation of nature, which are central features of Taoist thought seem to have been reflected in the genesis and even the names of many Tai Chi movements.

As Taoism evolved over the years through the teachings of Lao-Tzu and other philosophers, it was realized more and more that spiritual development also called for a sound physical being. Teachers like Chuang Tzu (399-295 BC) first introduced the movement philosophy through their writings, which forms the core philosophy of Tai Chi. It stresses balance, flexibility and agility rather than on the use of force, and marked the first shift towards the "Nei-chia" (internal, intrinsic) school of exercise. By "intrinsic" it is meant that Tai Chi, as also Taoism, draws on the inherent internal strengths of the being, through an understanding of equilibrium - of "using softness to defeat hardness" – rather than using brute external force ("A force of 4 ounces can overcome a force of 1000 pounds").

Tai Chi Chuan and Taoism are therefore inexorably linked together. Tai Chi is a physical representation of Taoist ideals, the ungraspable made graspable through physical principles whose very movement reflects the motion of the Tao itself.